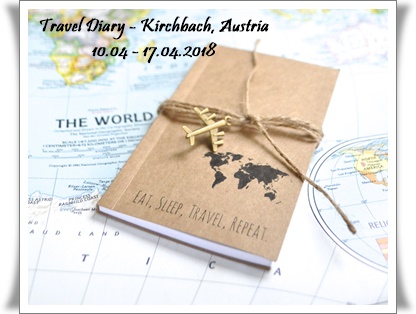 After a good night sleep and a great breakfast, I was ready to take on Vienna on my own. Sunday morning, the city hadn’t woken up completely. 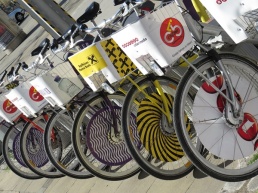 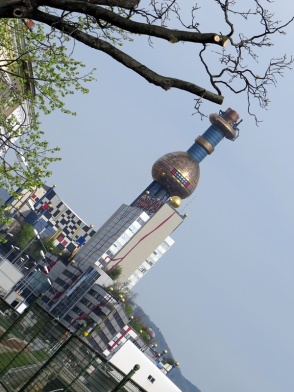 When Dia drove me home we passed Karlskirche and Schwarzenbergplatz… I liked what we passed, so it became my first point on my do-it-note. When I checked online was both just a short walking distance from Stadtpark, one of my favorite spots in Vienna. 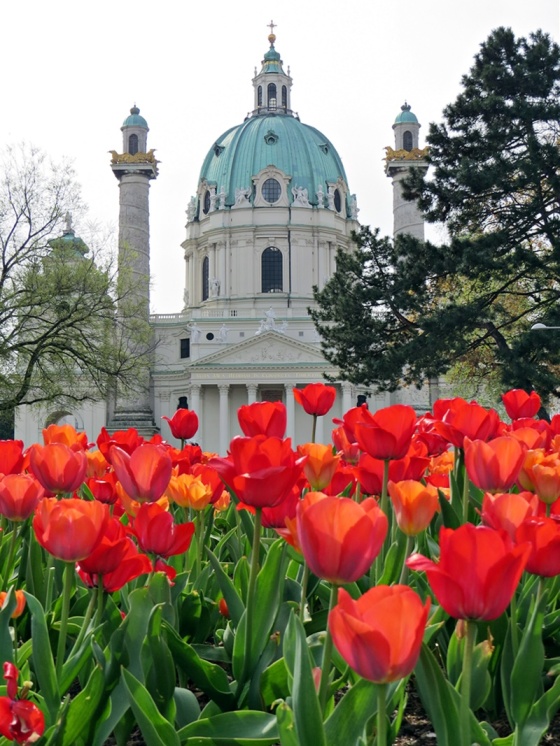 I arrived about 45 min before mass … and the beautiful church was getting ready. Very impressive and stunningly beautiful inside. There was restoration work going on with the ceiling so I couldn’t capture the full magnificent ceiling. 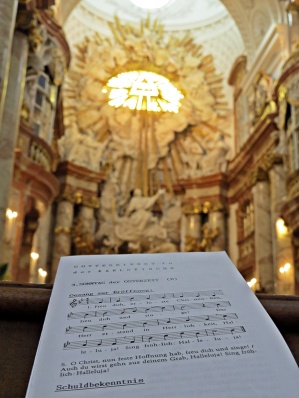 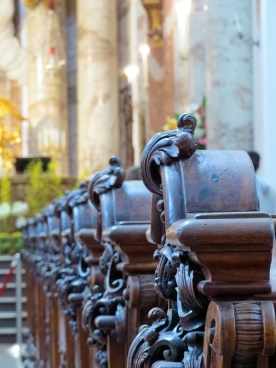 Don’t know what has happened to me, I have never visited churches when I have been aboard before – I don’t visit them here in Sweden neither. My excuse for not going inside a church has been … if I don’t visit churches at home, why should I do it aboard. Maybe it has to do with all the wonderful people that have left me behind, one of them are my mum.

Maybe there is a truth in what my grandma always said: When the devil becomes old … she becomes religious. *laughing

Some of the visitors didn’t have any common sense at all – when they took away the barrier rope in the front of the church and the altar to make the church ready for the mass, they just walk up to the altar.  And if they were spoken to, they didn’t leave the area.

I left when the Kardinal arrived. During my whole visit to the church, the organist was playing the most beautiful music. One of the pieces he played is this what you are listening to now: Mozart’s  Requiem K.626 – 8. Lacrimosa. The whole church was decorated with the most wonderful fresh flowers arrangements.

They hold concerts in the church a couple of evenings per week and if I had been able too I would have gone the day after, next time I JUST have to do it. They had one concert with Vivaldi’s “Seasons” and Mozart Requiem on Saturday evenings. Ticket prices from €20-€40. You can book online  Wien-Ticket or you can buy from Mozart himself outside the church, he was a bit morning tired when I was there. 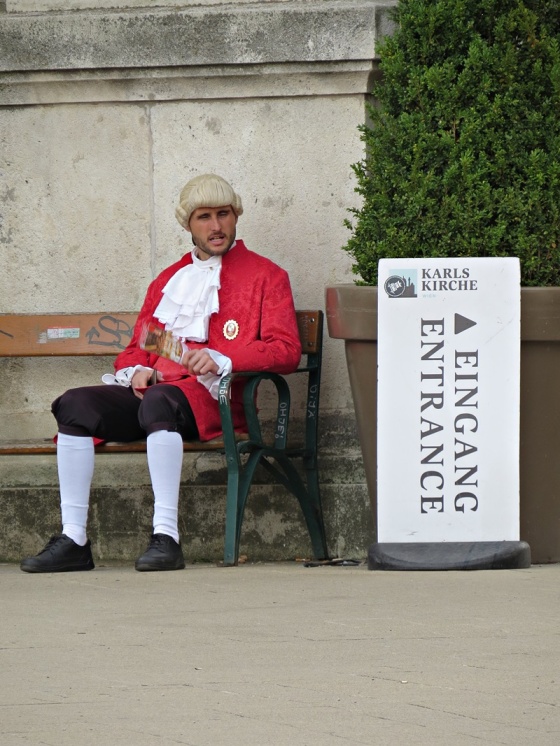 It takes about 5 min to walk over to the Schwarzenbergplatz with “The hero monument for the unknown Russian soldier” erected to commemorate the liberation of Vienna by the Red Army on whose 20-meter-high pedestal stands the twelve-meter-high statue of a Red Guardsman with a flag in his hand, he stands against the background of an 8 meters high balustrade, at the ends of each a group of two fighters was attached. The monument was built exactly on the main axis of the square, so it is easy to see from the ring road.

The monument was prepared by the Red Army even before the capture of Vienna and solemnly unveiled on 19 August 1945, when the Soviet forces still occupied Vienna alone.

The fountain in front of the memorial is known as Hochstrahlbrunnen (high jet fountain), it was built in 1873 to celebrate the completion of Vienna’s water supply system.

Magnificent buildings all around: Belvedere Palace, Palais Hoyos, Hotel Im Palais Schwarzenberg, The House of Industry, and Wiener Konzerthaus, but the French Embassy stole the show for me. What a building!!!! 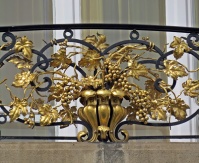 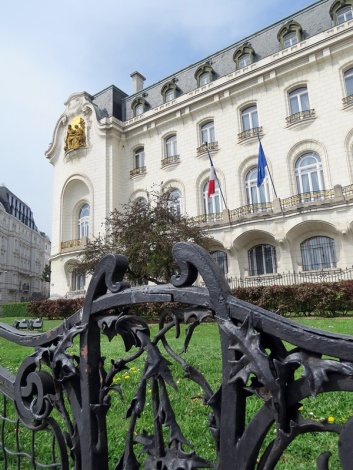 The most interesting buildings along Schwarzenbergplatz is the home of the French Embassy, built between 1904 and 1912 to plans by the French architect Georges Chedanne, who is better known for his design of the Galeries Lafayette in Paris. The building, designed in Art Nouveau, and unlike anything other buildings in Vienna. 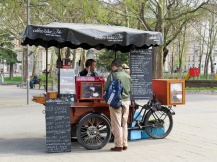 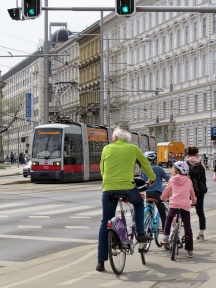 I didn’t know at the time that the Belvedere Palace and gardens were just behind the monument, so I have now put that on my do-it-note for the next visit.

From Schwarzenbergplatz to the Stadtpark is about 45 min …. if you have a camera in your hand … otherwise only 15 min. I will take you to my favorite and MUST-places next time: lunch in the Stadtpark and the Burggarten with das Schmetterlingshaus.

“I do not think the devil cares how many churches you build,
if only you have lukewarm preachers and people in them.”
Charles Spurgeon

15 thoughts on “travel diary; kirchbach – vienna on my own (karlskirch & schwarzenbergplatz)”