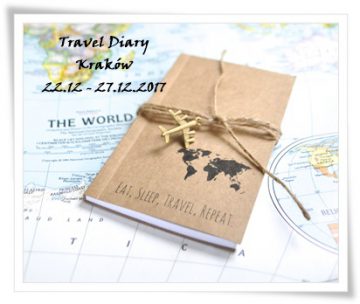 So it was Christmas Eve and … looking at it – just as the day before but in another shade of grey … and still wet. As our guide in Toyko said … I’m sorry, but I can’t control the weather – the only thing I can control is my husband!!!! So it was just to get on with it.

It was Christmas Eve and I decided to spoil myself with a couple of glass of “champagne” and an extra order of Eggs Benedict for my breakfast. I was only going to chase more street art. So I took my time. No rush to get wet and cold. 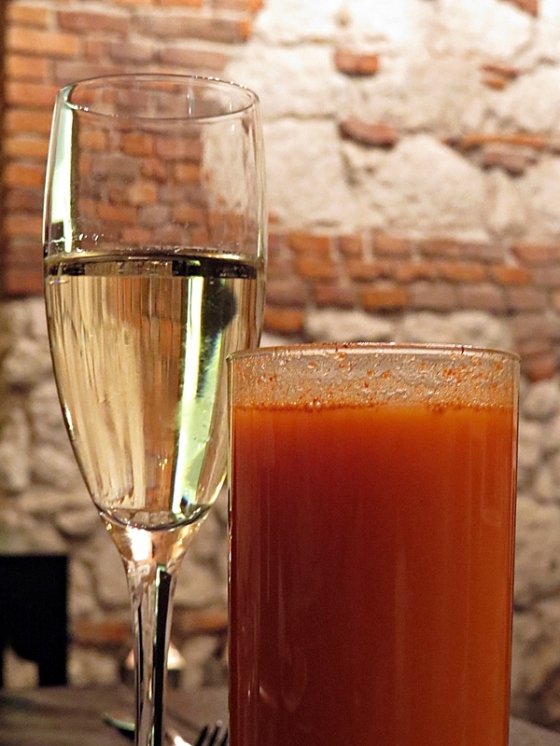 The dinner for the evening was I going to enjoy at the hotel’s famous star restaurant “Amarylis”, one of Poland’s 100 best restaurants. Not like me to dine on the hotels where I’m staying, but on Christmas Eve there aren’t any choices. 98% of all restaurants are closed in Poland.

Returning to my room … Santa had paid me a visit (maybe he cleaned my room at the same time???!!!), a Christmas gift on the desk from the hotel and their chef’s. Such a lovely though and Chrismas felt warm and pleasant in room 15. Beautiful wrapped: a jar of home-made chutney and jam. Just a lovely touch from the hotel.

I got all the maps for the street art hunt and got the weather protection on.

It wasn’t a pleasant day out there – but it was just to get on with it. Didn’t feel for spending the day sitting at the hotel, but I must have been the only one with that thought. It was hardly anyone out and about. They had more sense than me. I’m sure that up by the Christmas Market there would be some brave souls, but I was going the other direction. The trams were running, but with very few passengers.

Everything was closed up, but the liquor stores were open. 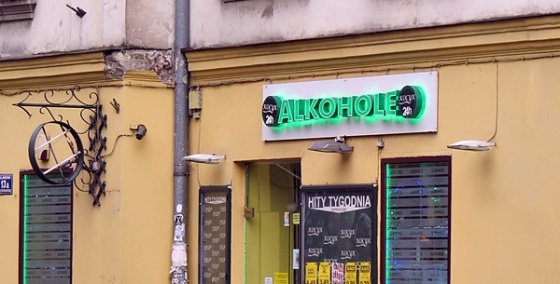 I did my best to find the street art, but I don’t know what happened to art???!!!! Probably I was lost in transit again. 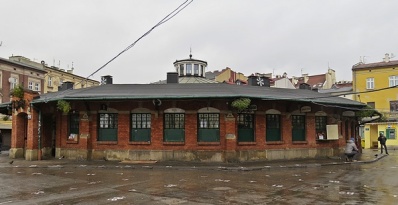 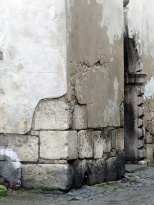 The Wysoka synagogue (High Synagogue)  was established as the third in a Jewish town in Kazimierz. It was built after 1556, but not later than in 1563. During the occupation of Poland in World War II, Nazis stripped the interior of all equipment. The ceiling and roof were destroyed. At present only the stone niche for the Aron Kodesh and the wall-paintings uncovered early in the 21st century by art conservation remain. The High Synagogue serves as a Landmark Conservation building.

There is 6 Synagogues in the old Jewish Quarters and a small cemetery. For some reason didn’t I go inside any of them. I wish I had.

Kazimierz, between the Wisła River and ul. Dietla (where a tributary of the Wisła once flowed) was the center of Jewish life in Kraków for over 500 years before it was systematically destroyed during World War II. In the communist era, it became one of Kraków’s dodgiest districts while gradually falling into disrepair. Rediscovered in the 1990s, thanks to the fall of the regime and worldwide exposure through the lens of Steven Spielberg. 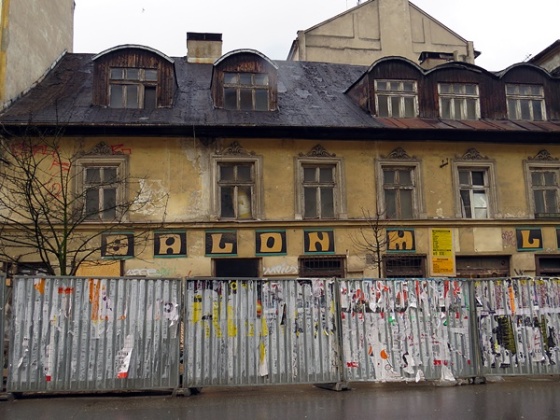 1910 the Jewish population stood at 32,000, a figure that was to nearly double during the inter-war years. It would come to a dramatic end with the Nazi occupation of Kraków and Hitler’s systematic extermination of the Jews of Europe. A mere 3-5,000 survived the Holocaust, a large proportion of them saved by Oscar Schindler.

Opened in September 2010, the Father Bernatek Footbridge (Kładka Ojca Bernatka) straddles the Wisła River just south of the center, linking the districts of Kazimierz and Podgórze. The leaf-shaped, 130m structure accommodates both pedestrians and cyclists with its twin walkway design by local architect Andrzej Getter. 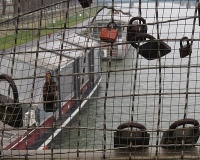 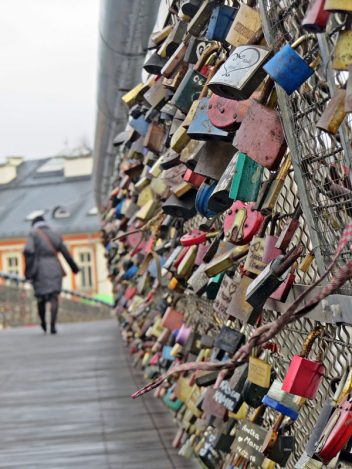 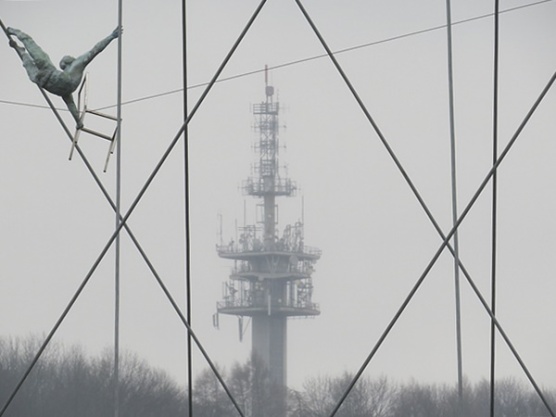 When I reached the other side of the river – I saw the direction signs for Schindler’s factory, about 20 minutes walk. But with everything closed I didn’t play around with that idea for very long.

I was now in Podgórze, a large district rich in natural beauty, tragic history, and unusual attractions I been told. 1941 Kraków’s Jewish population was marched into the center of Podgórze and walled off in what became known as the Kraków Ghetto. 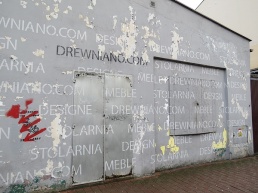 Somebody has called Podgórze: the foothills of memory.

Centre for Documentation of the Art of Tadeusz Kantor (CRICOTEKA) – was the first thing that caught my attention, just on the riverbank. I couldn’t decide what building was most interesting – the old or the modern, but they two together both Oscar and I liked.

I didn’t notice it from the other side of the river – but it’s a truly impressive design by Stanisław Deńko. It’s a museum and it open in 2014. The historic building is the former power station. 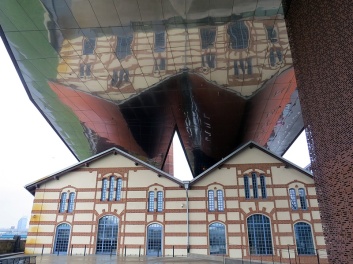 I was still chasing street art and one of the most famous pieces, mural Blu (Ding Dong Dumb) – and I did quite a big walkabout (that I didn’t mind) before I found it with some local help. Blu is an Italian street artist that currently lives in Bologna, Italy. He started painting in a capital of Italy’s Emilia-Romagna Region and has been involved in the street art scene since 1999. Ding Dong Dumb was painted in 2011. 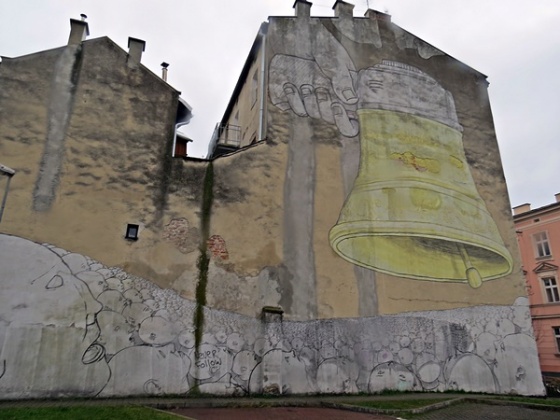 At that time I had been walking around for 4 hours and I started to be a bit cold because I was already a bit wet – and I thought I will take the tram back to the hotel. So I put PLN 5,00 into to the ticket machine and expected 1.20 back plus the ticket, but I got 0.30 back and no ticket in sight. I felt more stupid then upset, but it meant that I had to walk over the river again. And I wanted a cup of coffee so badly. 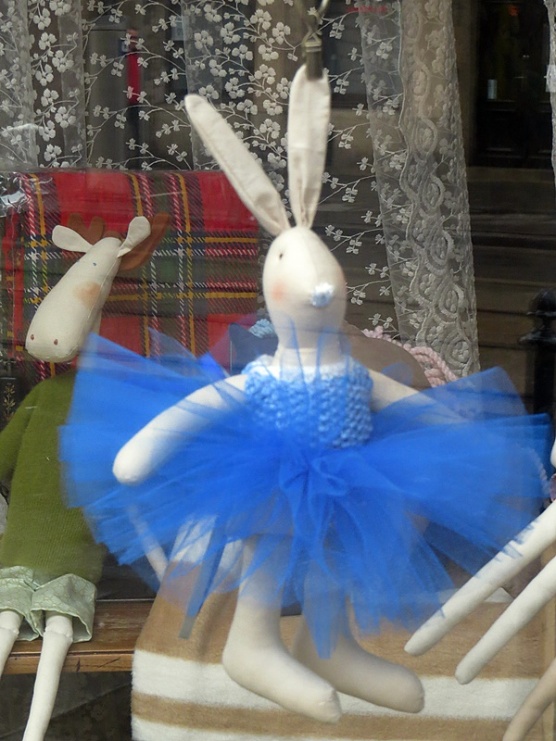 So I walked the Marshal Józef Piłsudski Bridge and ul. Krakowska – met the most lovely lady with her adorable looking sleeping boy in the tram. He had the right idea about getting home in the most comfortable way.

My poor feet was so happy when I reached the hotel and the handsome young men in the reception plus the chefs saved my life with a big cappocinio and freshly made sandwiches, served in the lobby. 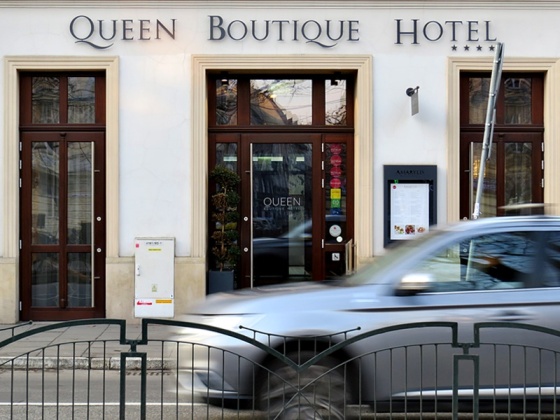 9 thoughts on “travel diary, kraków – day 2 … another shade of grey”