During our stay in Warsaw I wanted to come away from all the “heavy” history that the city carries so proudly and when looking from the little tourist guide that I found in my hotel room, my eyes went more or less directly to The Neon Muzeum and my travel mate, Sue … was in all in favor for it.

The Neon Muzeum is permanently based in Soho Factory, Praga on Ul. Minska 25 / Building 55 , a creative and trendy area of Praga. What I understand from their website did they have over 18,000 visitors in one single night, it was during the European Museum Nights in 2015. Record breaking!!!! 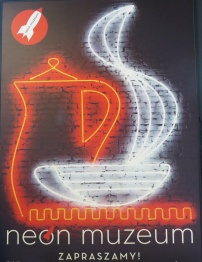 The driving forces behind the museum are the sole creators and directors, David Hill and Ilona Karwinska. In 2005 they built the foundation of the museum with documentation project entitled ‘Polish. Neon’.

The preservation and renovation of the remaining cold war neon signs,  the BERLIN sign seem to have started the whole collecting process.

Ilona Karwinska is a British/Polish photographer and David S. Hill is UK graphic designer. David was at the museum during our visit.

What I understand is neon a colorless, odorless and tasteless gas. Don’t have a clue how they get the colors into the signs. Found it at About.com!!!

One way is to use another gas or a mixture of gases to produce colors. As mentioned earlier, each noble gas releases a characteristic color of light. For example, helium glows pink, krypton is green, and argon is blue. If the gasses are mixed, intermediate colors can be produced.

“The classic neon lamp is made of a glass tube containing a mixture of neon (99.5%) and acrgon gas. There are two electrodes, one positive, and the other negative. Voltage rises and an arc is struck between. The neon lamp works on AC or DC power. 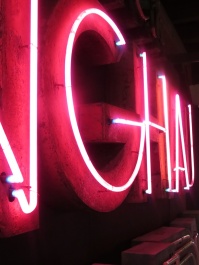 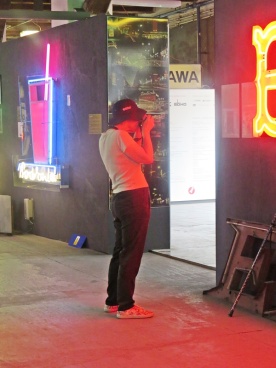 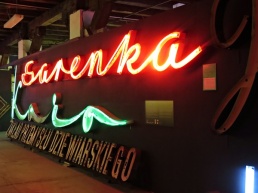 1857 Heinrich Geissler – father of fluorescent lamps: developed a glass tube with partial vacuum with two electrodes on each end. He experimented with electric arcs through different types of gasses. The “Geissler Tube”

1915 Georges Claude – around 1902 discovers how to create neon gas during his work on liquefying air. Claude is aware of the work of George McFarlan Moore in New Jersey, and he creates a “Moore Tube” with neon gas. After further work he displays the first modern neon lamp in 1910 a the Paris Motor Show (Salon de l’Automobile et du Cycle). 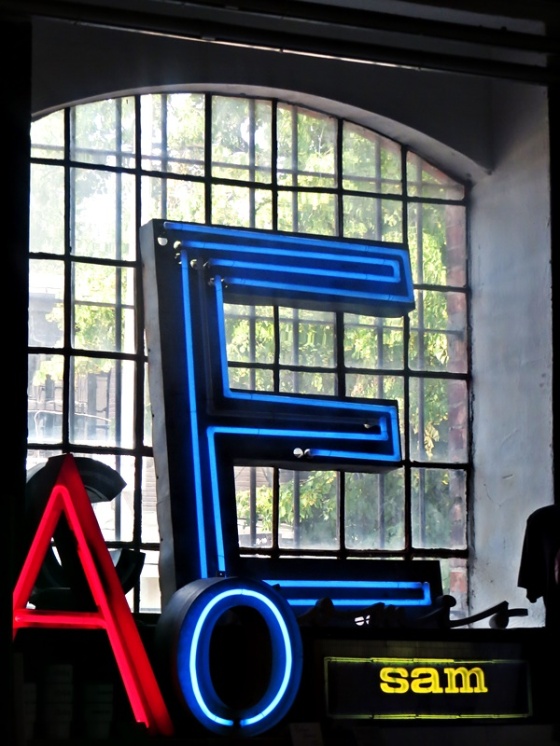 In 1926 the first neon sign was lit in Warsaw if I don’t remember wrongly. Some of biggest artist was Witold Janowksi, Piotr Kowalski,  Janusz Rapnicki, and Jan Mucharski. One of Poland’s big artists today isTim White-Sobieski.

“They manage to salvage Poland’s culturally significant neon signs of the 1960’s-70’s from the dustbin of history. During the post-Stalin years these neons were seen as symbols of economic success and the strive towards a more open and culturally relaxed society. The glowing signs, designed by some of Poland’s top architects and designers, advertised products, cinemas, dance halls, restaurants and cocktail bars and also served as local landmarks. 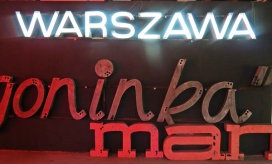 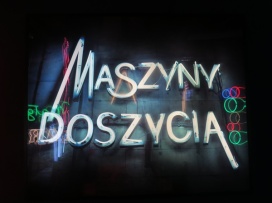 The post-communist years saw a scant disregard for anything connected to that era, many buildings were demolished and the beautiful neons were simply tossed into skips or left in states of disrepair to rot away. Luckily, Karwińska and Hill saw the significance of these artefacts and have managed to save over 200 neons and around 500 letterforms from certain destruction.” (text; inyourpocket.com)

And for the entrance fee of 8zloty (senior) … full price 10 … we had a brilliant couple of hours and out of the sun. It’s not a big museum … but I left with a memory card overfilled with images. A true little gem that I recommend.

My last image is the night view I had from my hotel room – today’s Warsaw neon lights, this was rotating with the message “Kocham Warszawę!  … “I love Warsaw! … SO DO I!!!

“I love museums but I don’t want to live in one.”
Tim Cook