The New Palace (Neues Palais) is a palace situated on the western side of the Sanssouci park in Potsdam, Germany. The building was begun in 1763, after the end of the Seven Years’ War, under King Friedrich II (Frederick the Great) and was completed in 1769. It is considered to be the last great Prussian baroque palace. The castle is in two section opposite each other.

I have seen many palaces, but nothing like this and still not on the list of the world’s largest palaces. It’s huge in my eyes. It’s situated  in Sanssouci Park that holds another 6 palaces and one is the small but so beautiful Sanssouci Palace.  It is a much larger and grander palace than Sanssouci, having over 200 rooms and 400 statues as decoration. It served as a guest house for numerous royal visitors. It is now housing parts of University of Potsdam. 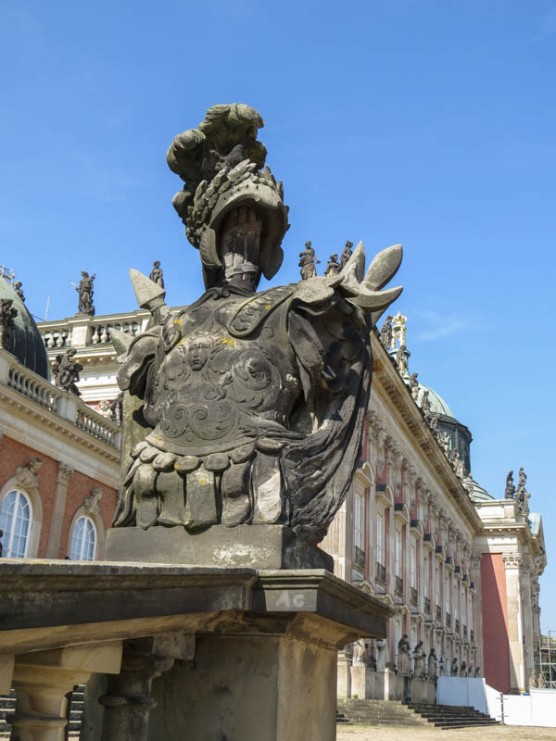 Sanssouci Park is a large park and following the terracing of the vineyard and the completion of the palace, the surroundings were included in the structure. A baroque flower garden with lawns, flower beds, hedges and trees was created. In the hedge quarter 3,000 fruit trees were planted.

The greenhouses of the numerous nurseries contained oranges, melons, peaches and bananas. The goddesses Flora and Pomona, who decorate the entrance obelisk at the eastern park exit, were placed there to highlight the connection of a flower, fruit and vegetable garden.

A must if you ever visit Berlin, there is trains and S-bane that goes to Potsdam Hauptbahnhof, a daily travel pass cost 7.60Euros.  We took a Hop On-Off bus tour that costed 12 Euros for us elderly. But there goes quite a few local buses to different entrances of this massive park.

Potsdam, is the capital city of the German federal state of Brandenburg. It directly borders the German capital Berlin and is part of the Berlin/Brandenburg Metropolitan Region. It is situated on the River Havel, 24 kilometres (15 miles) southwest of Berlin’s city center. 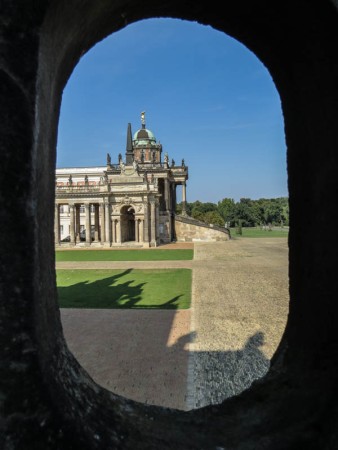 Potsdam was a residence of the Prussian kings and the German Kaiser, until 1918. Around the city there are a series of interconnected lakes and cultural landmarks, in particular the parks and palaces of Sanssouci, the largest World Heritage Site in Germany. The Potsdam Conference, the major post-World War II conference between the victorious Allies, was held at another palace in the area, the Cecilienhof. 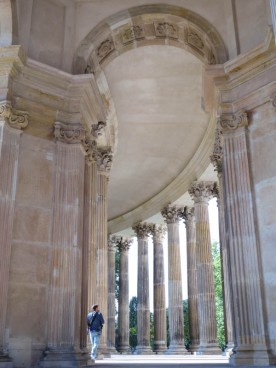 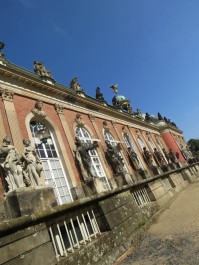 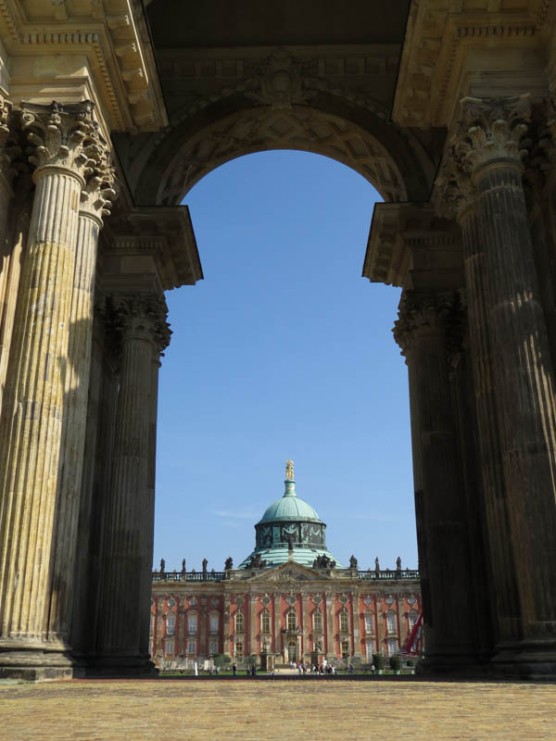 The current layout of the park can be traced back to the nineteenth century, when it was remodeled by the famous Prussian landscape architect Peter Joseph Lenné. The 700-acre /287-hectare large park consists of several different gardens, all with their own character. It is intersected by a wide lane, the Hauptallee, which runs from an eastern entrance all the way towards the Neues Palais on the west side of the park, a distance of two kilometers (1.2 mi).

Potsdam is influenced by the Dutch, French and Russian. The old town is very picturesque and Potsdam also holds some magnificent buildings and villas. Here is the link for Potsdam; http://www.potsdam-tourism.com. At my next visit I will give more time to Potsdam.

Potsdam was server damage during the war and the the New Palace too, but restored to it’s old glory. I’m amazed over how Germany has manage to restore all the magnificent buildings that was so damage after the war and the East side of Berlin, it’s like nothing ever happened to the city.

We had the weather on our side while visiting Potsdam a fantastic sunny Saturday with blue sky and few light fluffy clouds. The park was very busy, but no crowds because the park is so enormous. There is also horse carriages that will take you around to all the palaces through the park. 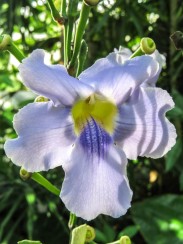 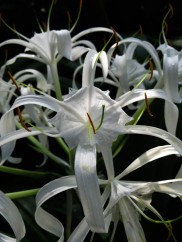 The Orangerieschloss was all covered up because maintenance – and we decided to visit the Botanical Garden instead in hope to find a cafe or something, but we were not that lucky .. but we went inside anyhow to check out their Orchid house, but it was closed????!!!!

So we visit a couple of the other houses and after that  we jumped on the bus again to the Old Mill and there we could enjoy a bratwurst and a beer … and walked over to the beautiful and romantic Sanssouci Palace. 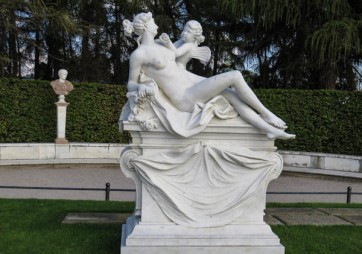 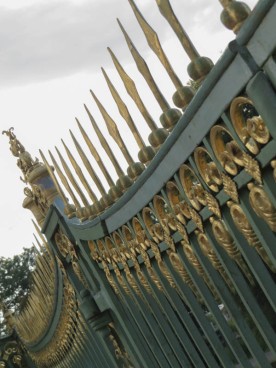 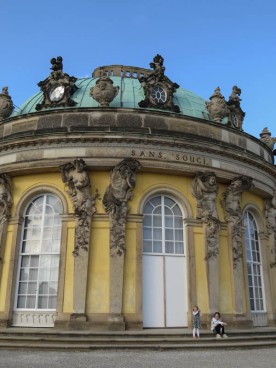 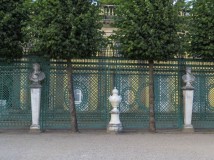 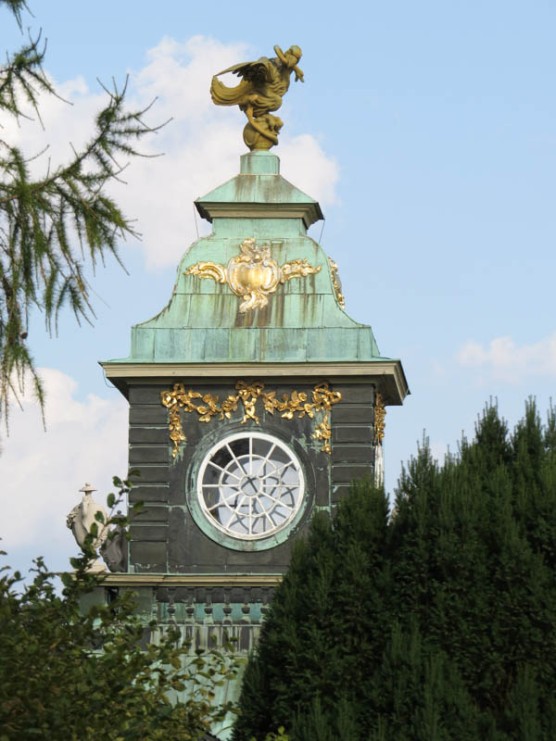 The structure of the palace remained unscathed despite fierce fighting in the vicinity in 1945, but the ancient windmill, retained in the park by Frederick to add rustic charm, was destroyed – but today restored. 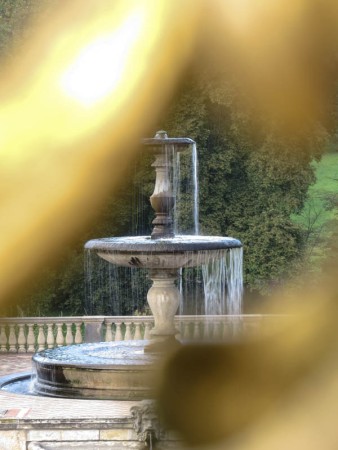 Sanssouci Palace was summer palace of Frederick the Great and built for entertainment … Frederick was very musical. Frederick was a patron of music as well as a gifted musician who played the transverse flute. He composed 100 sonatas for the flute as well as four symphonies. That’s very strongly shown in the decorations around the palace.

Frederick also introduce potatoes to Germany. He thought they were a great idea, and made a issue out of eating potatoes and smacking his lips at state dinners. When not fighting in some war with Austria, he would visit towns and pass out potatoes. His idea worked, and potatoes became a staple crop for the nation.
That’s why people put potatoes on top of his grave.

I agree completely with Frederick – I just LOVE my pratie.

“The potato, like man, was not meant to dwell alone.”
Shila Hibben

8 thoughts on “palaces and potatoes”