We had some fantastic food during our trip to Hong Kong and Japan, but for me “The Principle” provided the best. Not only the food, the whole package … it became a very fun and exciting evening – with surprises on plate after plate. 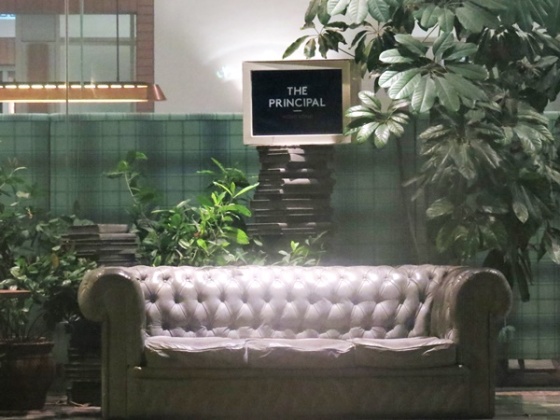 I had booked the restaurant from Sweden and when I saw that their Degustation Menu had oysters as first course, one of the few things I don’t eat .. I asked them if it was possible for them to change the first course. Got answer straight away, no problems what so ever. So the fantastic service started already than. 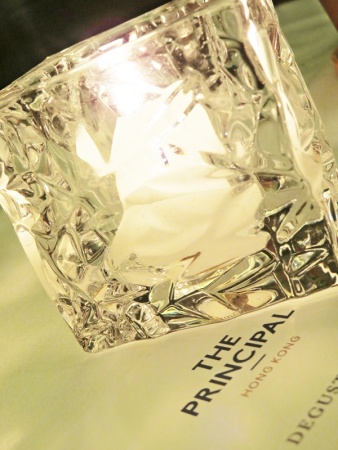 When we stepped out from our taxi to we was welcomed by the hostess outside the restaurant – like  they had been waiting for us … forever, in a way they had. Very nice touch. 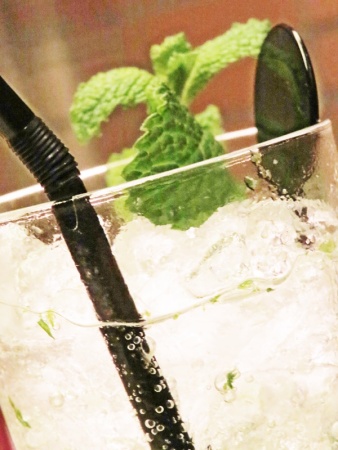 I had an absolute perfect Mojito and Nancy had a Margarita that she was very pleased with.

Before our 7 course dinner we got some Amuse Bouche, which is some nibbles of different kinds. Every little nibble was a delicious surprise. The most interesting nibble was the “Nagroni Cocktail Ball” – I don’t have a clue how they made that work – but inside a deep fried little ball there was a cocktail. When I put in my mouth it exploded in a very nice way. 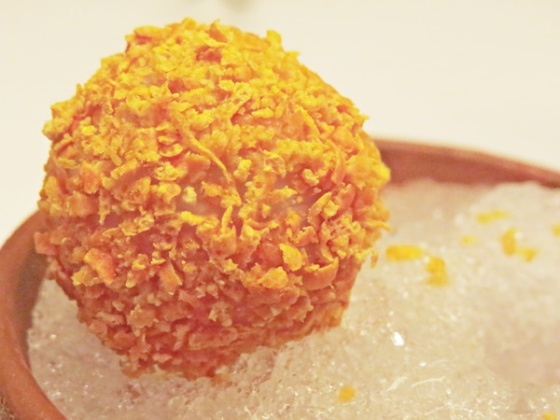 The Negroni cocktail is made of one part gin, one part vermouth rosso, and one part Campari. It is widely believed that the Negroni was created and named for Count Cammillo Negroni in the 1920’s when he ordered an Americano with gin at Cafe Casoni in Florence, Italy.

The staff was very entertaining, funny and relaxed, but also very proud of their restaurant and what it stand for. 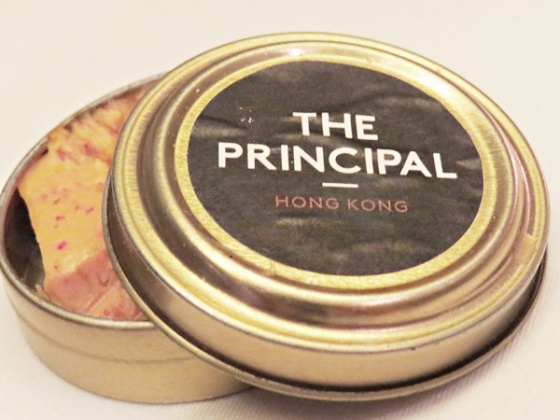 Normally I don’t take image from food when it comes to highly recommended restaurants, because a bad images can’t spoil a good review – but at the Principle I just had to. The light wasn’t the best, so they came out very dark, but thanks to Photoscape I been able to edit them and they came out quite good. 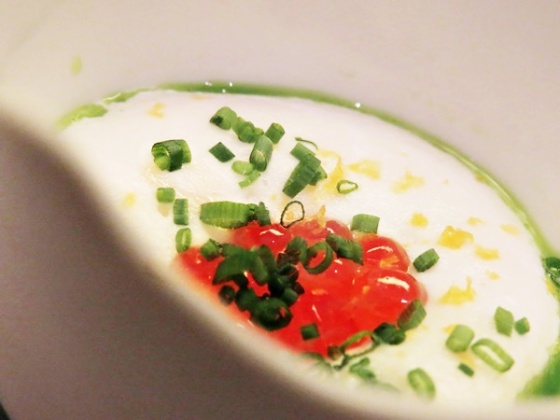 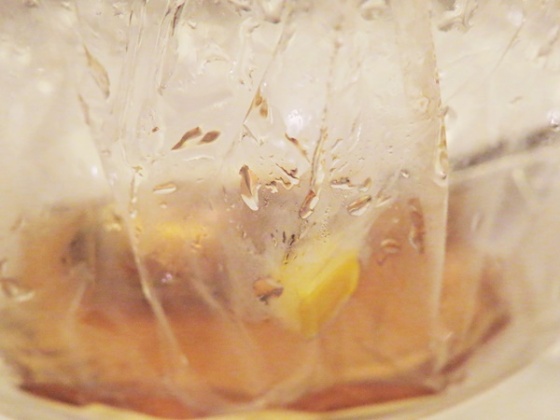 I loved everything that was put in front of us – the innovated way to serve the dish –  like the consomme that came in a clear paper that was nicely tided – and when we open the “papillote” all the fantastic aromas was released.

Tuna, I just love it in any form and shape and also seaweed, when we got the plate I couldn’t see the seaweed and I was a bit disappointed but it was there … underneath that fantastic creation. 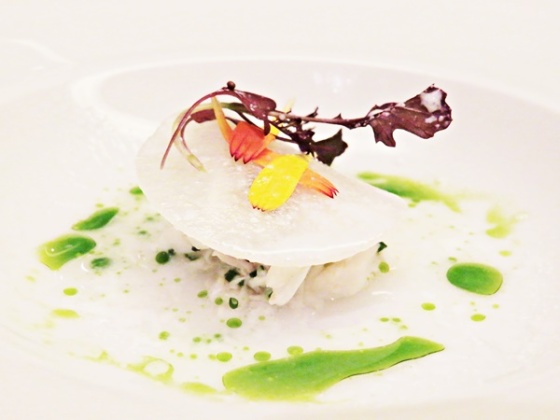 The Albone, a pork  stew  served in an iron dish – to die for … close to that I licked the dish. 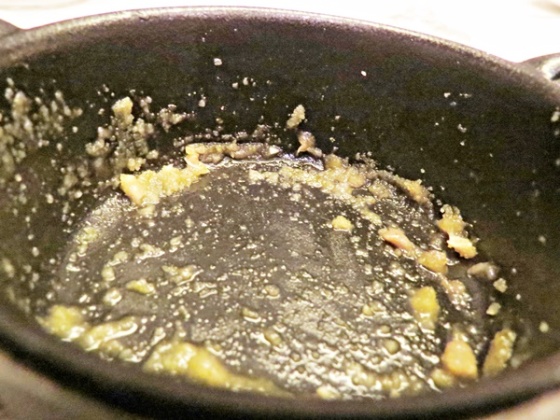 We eat a lot of venison in Scandinavia and restaurants really knows how to make fantastic dishes of it – so I was a bit curious over be eating venison in Hong Kong. Cooked to perfection and all the flavors was there, because personal I think venison should have the flavor of game and forest. 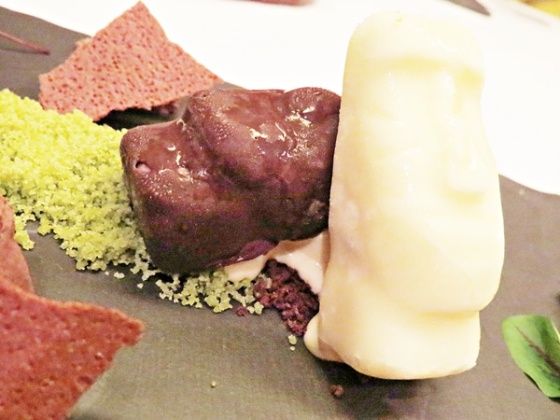 The both desserts???!!!!! What can I say …. I’m all for dessert – I read the dessert section of a menu first, but today most restaurants has it separate. Which I’m very annoyed about.

Without a doubt, for me this was our best dinner of the 22 we had.

Sorry, Mm. Alain Ducasse –  Beige is a very elegant restaurant with outstanding food, but there was no surprises what so ever. “The Principle” blow the socks off me with every dish.

We also enjoyed some fantastic wines; Ata Rangi and Churton from New Zealand, Marques de Caceres … a wonderful Roija. We bought by the glass. 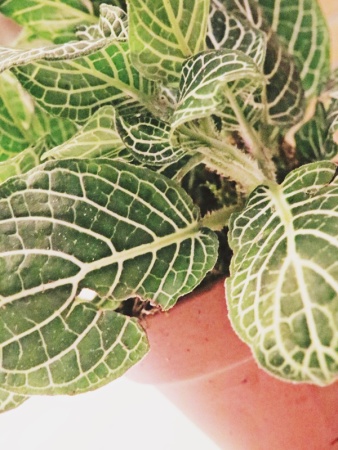 When of the young waiters told us that he went to Lappland, Finland for his honeymoon because he wanted to see the Northern Lights. He went all that way from Hong Kong to Lappland for the Northern Light and it lasted only for 35 seconds. I asked him if he still was married and he are. He  wants to go back.

Promised him that I will send him a post card with the Northern Lights on – so I did yesterday.

We walked back  to our hotel in the warm and pleasant Hong Kong evening.

Thank you so much, all of you, at the Principle.
You’re ALL stars on my gastro sky.
You truly delivered magic!!!

If you want to read some of my other restaurant reviews – just click on this logo.

The cloud for this post is “Set It Off” – from the soundtrack to the movie “The Principle”, 1987, staring James Belushi & Louis Gossett Jr. Original preformed by Strafe.