The Fall …..a psychological thriller that looks into the lives of two hunters; one is a serial killer that stalks his victim in and around Belfast and the other is a female Metropolitan Police Superintendent that has come to Belfast to help out in the investigation of a murder.

“The Fall” is a BBC crime drama television series set in Northern Ireland and created, written and, in its second series, directed by Allan Cubitt. I really hope there will be a 3rd. As a writer of a series that introduced the world to Helen Mirren’s Detective Chief Inspector Jane Tennison, Allan Cubitt is, of course, well-acquainted with strong female characters.

The first series was broadcast in both UK and Ireland May 2013. Second series started in November 2014.

First of all I start looking at it because it was all filmed in Belfast, on my old streets – but the series is really good and very cleverly filmed. Dark and scary, a very intelligent thriller. It keeps you hooked and on the edge of your couch.

“- Gillian Anderson as Detective Superintendent Stella Gibson, a Metropolitan Police officer assigned to the PSNI on a 28 day review. Following the realization that a serial killer is on the loose, Gibson decides to accept a semi-permanent secondment to supervise Operation Musicman.
– Jamie Dornan as Paul Spector, a serial killer and a bereavement counselor. He has a wife, from whom he later separates, and 2 children.

– Niamh McGrady as PC Danielle ‘Dani’ Ferrington, a patrol officer seconded to Operation Musicman at the behest of DSI Gibson.
– Bronagh Waugh as Sally Ann Spector, the wife of Paul Spector and a neonatal nurse.
– Aisling Franciosi as Katie, a 15-year-old schoolgirl who is in love with Paul and is aware he’s a serial killer. She is also the babysitter for his kids.
– John Lynch as Assistant Chief Constable Jim Burns, Stella’s supervising officer; the two had an affair years earlier.
– Archie Panjabi as Professor Reed Smith, a pathologist assigned to Operation Musicman. (text wikipedia.org)” 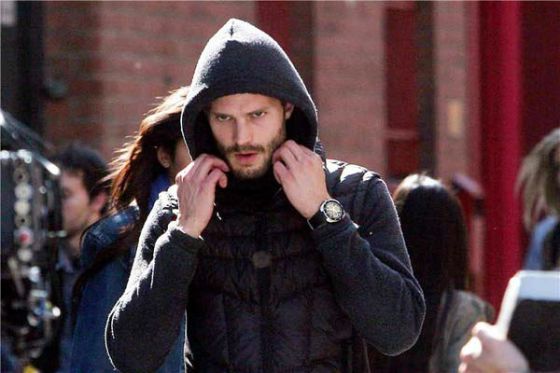 This drama was rather unusual as we know who the killer is from the start; the question is when and how will he be caught. Gillian Anderson (“The X Files”) is superb in the role as Stella Gibson, with a coldness and hardness – woman and police with no scruples. Neither in work or private life, that says what she thinks and sees. A woman that don’t beat around the bush when it comes to her sexuality. She portrays a staggering personality.

Stella has some brilliant lines in the series; – “What if he kills a prostitute next? Or a woman walking home drunk? Late at night in a short skirt? Will they be in the way less innocent, therefore less deserving? The media loves to divide women into virgins or vamps, angels or whores. Let’s not encourage them.”

Or my favorite; “That’s what really bothers you isn’t it? The one-night stand? Man fucks woman. Subject man, verb fucks, object woman. That’s okay. Woman fucks man. Woman subject, man object. That’s not so comfortable for you is it?”

Stella is a cool feminist heroine in pencil skirts, silk blouses and stilettos, while combating male violence against women.

Stella has also had an affair years back with her boss, Jim Burns, that makes things tense and complicated at times.

Jamie Dornan (Mr Grey – 50 Shades of Grey) is just amazing as Paul Spector – even if you know he is the killer … you “like” the guy and feel sorry for him. Spector a loving family man and father of two and truly supporting and caring in his job, but he constantly fights with his demon. Spector is slender, good-looking and athletic. His sweet, sensitive daughter adores him. I think it’s okay to like Paul Spector.

They both know are aware of each other’s presents and both knows that the other knows. Paul breaks into Stella’s hotel room and reads her diary. Stell gives out her phone number to Paul and in a phone ….. he starts talking about her darkest secrets, so she will understand that he knows. Paul even goes to the police and let himself get known.  It’s a constant “Cat and Mouse” game.

The viewer should  know is that the laws that govern women’s sexual rights  in Northern Ireland goes back to 1861.

The story takes the time to include complexities and unresolved events which are reflective of real life, like domestic violence and  abuse. Also the series shows some of the problems that still occur when not “the right kind” of people turn up in some areas in Belfast. There still some smoldering fire underneath and I suppose there will always be. For us others so hard to understand. 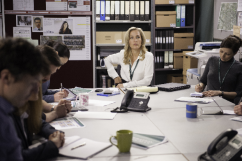 I don’t like scary movies, when I watched “Seven” many years ago I was under my coat at the theater 75% of the time – with “The Fall” I only left the room once, during the last murder. Otherwise I just couldn’t stop watching.

The first series was made available in full in the United States via Netflix’s “Watch Instantly” service starting in May 2013, and airs on Bravo and Netflix in Canada.

Israel, Japan, Australia and New Zealand have shown the series too. Gillian Anderson is hopeful there could be a third series of The Fall.

Second series gave some kind of closure, but still the end is open.

“A smart person is not one that knows the answers,
but one who knows where to find them…”
William Petersen

11 thoughts on “about two hunters”