This time Chicago embraced me with again with big warm hug, but bigger than ever before.

The whole trip started off with a big smile – through SAS airlines – we were not able to get two seats next to each other, when checking in online.
At Copenhagen Airport I asked the service desk for help – and we got new seats and upgraded to Plus seats, very comfy and pleasant. Service was top class even if the flight was 45 min delayed because with hydraulic problems with the plane, so they had to find another craft.

The flight caused me pain in legs and feet, because I have to wear my support tights and my feet swelled so much, so the 8,5 hours seemed endless.

Arriving to our hotel, Wyndham Grand Rivefront Hotel, we were met with a very nice young man by name Anthony … he asked if it was our first visit and of course I told him that Chicago is my favorite city since 2001 – and he told me that I was Chicago’s favorite visitor and because of that he upgrade us to a corner twin room. And what a room … city , lake  and river view!! A FAB room.
My friend’s, Anna-Liisa (AL), first response was …. This room is bigger than my apartment.

So the start of our 10 US days couldn’t have been much better. It was so great to be back in the small big city with the bright lights.

First evening we had a very nice meal at “Pearl Tavern”, the place was nearly empty but the food was superb and so was the service.  AL had fantastic “Fish & Chips” and I went for a seared tuna salad. We had a fancy cocktail and a glass of very good sauvignon blanc. After all the hours we had been awake by then .. we didn’t need more to feel dizzy. When we came back to the hotel, ready for bed was it nearly 1am and we had been awake in over 20 hours.

Normally my body clock is okay when travelling to US, but this time … after 2,5 hours was I awake and alert again. But I got see the most stunning dawn … and see the city of Chicago waking up to a glorious day.

There was some mist in the horizon over Lake Michigan.

Our first day was most about visiting the Millennium Park with Pritzker Pavilion, Crown Fountain and Cloud Gate – after a bit disappointed breakfast at “Wildberry Pancakes and Cafes”. My last visit I had one of my best breakfast there, but the poached eggs was perfect. This time the park had an exhibition of Jaume Plensa’s gaint heads. 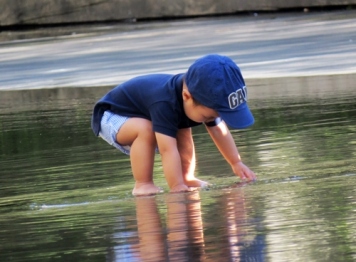 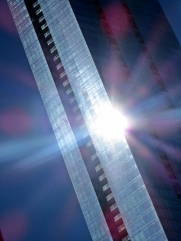 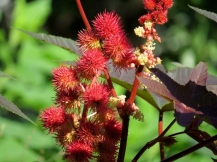 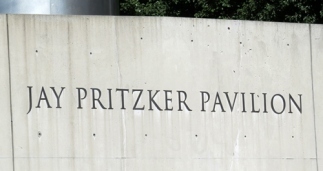 AL had a shopping list from her son and his family, so we started the chase in Chicago and we found one item at the Disney store and she found a pair of red ballerina at Nordstrom Rack. I found a silk tie, Kenneth Cole … to Anthony from us as thank you for the upgrade. And of course we both bought postcards.

We was early back on the hotel and had a good nap – went out again with the shopping list, but no luck. We took time to enjoy a great tea/coffee break at “Argo Tea Cafe”, before returning to the hotel for a second nap.

During our nap …. a serious strom hit Chicago with rain and thunder.

The evening we had dinner with Heather, my blogging sister – and her mum Jessi, at “The Gage”, very busy and noisy place … great atmosphere and food – but it was very difficult to hear what we were thinking. AL had their special burger and I had a venison burger, a really good burger. AL liked hers too.

After we said goodbye to the ladies and a fantastic time together, we went back to the Millennium Park and the fabulous Crown Fountain and even went down to the Buckingham Fountain, a far long walk than I remember  … and we was lucky enough to be able to view the color display to the music preformed by Chicago Symphony Orchestra, the last 15 min. Breathtaking. My images don’t make the fountain display any justice. 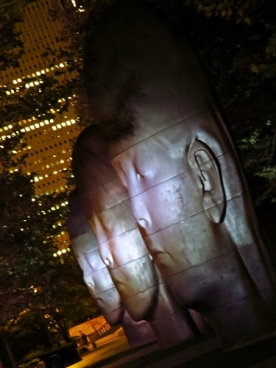 Walking back to the hotel I thought I we would be able to walk through the Jay Pritzker Pavilion, but it was closed and we ended up in the dungeons under Wacker’s Drive, we both felt a bit uneasy plus there was no air down there.

But now I know why there is so little traffic on Wacker’s Drive … all cars goes underneath it where there is very few traffic lights. We walk and walked until the pavements disappeared and I saw stair up to the street level by Du Sable Bridge. It was a big relieve to be up in the bright lights again and the Chicago’s New Moon.