I stands for Ingvar Kampard – the father of flat packs.

One of the world’s richest men that never have stayed on a luxury hotel, flies low cost airlines and that uses public transportation when visiting London. But he escaped the Swedish taxes in 1976.

It has been claimed that more people read the Ikea catalogue than the Bible – and that one in ten Europeans have been conceived on an Ikea bed.

Ingvar Feodor Kamprad – the founder of IKEA – born in Pjätteryd 1926. His parents was farmers and his paternal grandfather was from Germany

Kamprad began to develop a business as a young boy, selling matches to neighbors from his bicycle. He found that he could buy matches in bulk very cheaply from Stockholm, sell them individually at a low price, and still make a good profit. From matches, he expanded to selling fish, Christmas tree decorations, seeds, and later ballpoint pens and pencils. When Kamprad was 17, his father gave him a cash reward for succeeding in his studies. 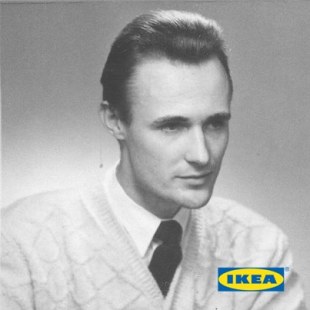 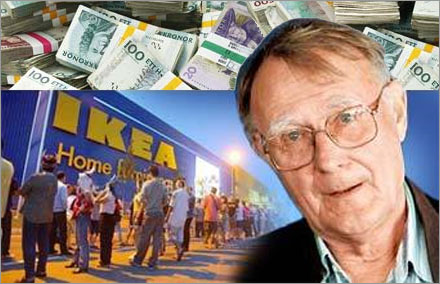 IKEA was founded in 1943 at Kamprad’s uncle Ernst’s kitchen table. In 1948, Kamprad diversified his portfolio, adding furniture. His business was mostly mail-order. The acronym IKEA is made up of the initials of his name (Ingvar Kamprad) plus those of Elmtaryd, the family farm where he was born, and the nearby village Agunnaryd.

He opened his first store in 1965, only to see the wind smash the neon sign and cause a fire which burned the place down.

In 1982 Ingvar founded the Dutch-registered Stichting INGKA Foundation is named after Ingvar Kamprad (i.e. ING + KA) who owns INGKA Holding, the parent company for all IKEA stores. The charitable foundation was reported by the business newspaper The Economistin May 2006 to be technically the world’s wealthiest charity – with an estimated value of at least US$36 billion in 2006 (larger than the Bill & Melinda Gates Foundation) – but its primary purpose is corporate tax-optimization and anti-takeoverprotection for IKEA. Kamprad is chairman of the foundation.

In June 2013, Ingvar Kamprad resigned from the board of Inter IKEA Holding SA and his youngest son Mathias Kamprad replaced Per Ludvigsson as the chairman of the holding company.

The dark side of this man is that in 1994, the personal letters of the Swedish fascist activist Per Engdahl were made public after his death, and it was revealed that Kamprad had joined Engdahl’s pro-fascist New Swedish Movement in 1942. Kamprad had raised funds for and recruited members to said group at least as late as September 1945. When Kamprad quit the group is unknown, but he remained a friend of Engdahl until the early 1950s. Kamprad in an interview in 2010 told her: “Per Engdahl is a great man, and I will maintain that as long as I live”

A Swedish TV channel has calculated Kampard real wealth. They concluded that it was a total of 650 billion (2011), which would make him the world’s richest person long over existing person, the oil billionaire Carlos Slim Helu, who has total assets of about 490 billion (2014). Don’t have a clue if it’s in US$ or Swedish Krona.

Kamprad has been married twice. In first marriage, with Kerstin, he has an adopted daughter, Annika Kihlbom. In the second, with Margaretha that died in 2011 he has three sons; Peter, Jonas and Mathias Kamprad. 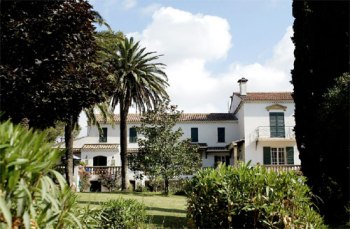 Kamprad has lived in Epalinges, Switzerland, since 1976. According to an interview with a Swiss TV broadcaster, Kamprad drives a 1993 Volvo 240, flies only economy class, and encourages IKEA employees always to write on both sides of a piece of paper.

And like me, he purchases Christmas paper and presents in post-Christmas sales.

Kamprad owns a villa in upmarket Switzerland, a large country estate in Sweden with 4 villas and Le Pradet vineyard in Provence, France.  Kampard is now supposedly moving back to Sweden in this year.

Last year Kampard had some treatments for his back pains – He has received specialist treatment in Switzerland for its sharp back pain – where doctors burned of nerves in the back because he will not have to be in pain and it seems to have worked out very well for him.

I have a personal little story regarding Ingvar Kampard – just weeks before I was moving back to Sweden in 2009 I ordered a bed from IKEA in UK – that was added in the last minute to my removal. It took some weeks before I got the bed all put together in Landskrona, but the second night on of the legs came off … nearly died of a heart attack.

To get a new leg wasn’t easy – neither UK or Sweden was willing to help me, because the shop had to open a package to get a new leg for me, and that meant that we wouldn’t be able to sell that bed.

So after a couple of weeks with visit to IKEA stores and phone calls I wrote a personal letter to Ingvard Kampard about my problem. It was July when Sweden is more or less closed for holiday. Monday 3.08 10 a’clock my phone rang it was the export director of IKEA and he told me that he had got my letter from Kampard that morning, his first day back to work with order to fix my problem before lunch.

Because my friend Gina had by then fixed a new leg from IKEA in Belfast after 2,5 hours convincing and it was in the mail on its way to me. But he offered to come with a new bed, take the old one away and the will also assemble the new bed. Because I turned down his offer … I got a gift voucher of 1000 SEK, that time nearly 200$. And also if I ever got a problem with IKEA again I should call him directly.

I still have Göran Börjesson’s mobile number. Do I have to say that I LOoOoOooove IKEA????!!!!

“To design a desk which may cost $1,000 is easy
for a furniture designer but to design a functional and good desk
which shall cost only $50 can only be done by the very best”
Ingvar Kampard

There is only one track that is suitable as cloud for this post and it’s of course ABBA’s “Money, Money, Money”. It was released as a single in 1976.

Text and information from wikipedia.org and google’s – without the help this post hadn’t been possible – thanks everybody.

23 thoughts on “postcard from sweden; i stands for ingvar kampard”