Arriving to JFK the luggage took ages and there was a misunderstanding between the booked sedan service and me – where to be picked up, but after talking to the driver on the phone, he came very quickly. Excellent service – helpful, chatty and very pleasant.

The Westin Grand Central, a total soulless hotel – but I will come to that in a later post. Just a fantastic location and fantastic beds.

We went for a light meat straight away after check in – unpacking we pushed to later. We had a great nights sleep and woke up 6.30am. Which is not bad for the first night and the jet lag. The city was waking up very quietly and no buzz at all, it was Sunday morning. Manhattan was probably recovering from a severe hangover.

First mission was of course to have breakfast at Grand Central and take in the grandness of the magnificent building, both inside and out.  But nowhere to sit down for a coffee, not what we could see … only shops and take away. 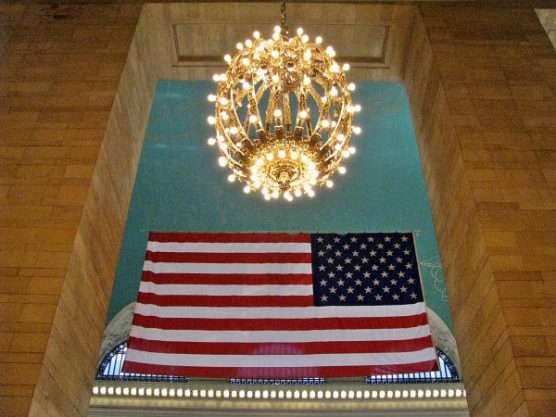 So we got our first breakfast at the British concept “Prêt à manger” on the corner of Lexington Ave and 43rd Street. Will do a post about our breakfasts place later on.

After the breakfast we started our walk from 43rd Street to the 9/11 Memorial. Did the walk last time I was in New York but from 33rd Street to The World Trade Center … but I think they have moved things around, because I can’t remember I walked that fare. Maybe it was easier to walk in March than in September and blustering sunshine.

We walked 3rd Ave to Astor Place and than on to Broadway … it took about 1,5hrs and somebody told us that we must have walked at least 60 blocks and my feet was very aware of it. *smile

At the 9/11 Memorial Center, 20 Vesey St – had to pay a visit there before enter the Memorial, need passes. So many times since the terrible event have I been thinking about the little chapel just beside the twin tower: had it survived, got damaged or fallen too???!!!.  And there is was like nothing had happen, Saint Paul’s chapel. They say that big wonders comes in small package. What I understand was it called the Sanctuary on Ground Zero. My photo of the chapel didn’t come out that well so I have gone to Google for help. Photo provided by panoramio.com.

The designer discount department store, Century 21 have moved a block and what I understand they have now a couple of stores on Manhattan. 13 years ago their only shop was just opposite The World Trade Center.

It was fantastic to see the new world trade … the Freedom tower – magnificent .. and my blue & yellow heart became very proud when I so that all the building cranes had SKANSKA on them, a Swedish construction company. The whole area around the Memorial was just like a big building site – very messy … frantic police police presence. And people everywhere trying to selling books about the event and the history. It put me off a bit. The security into the Memorial was very tight, had to be scanned and show our passed 4 times in total.

But inside the memorial everything fall into place and all the buzz, hassle and mess round the area was forgotten.  I would have loved for the museum to be open, but now delayed to spring 2014. All windows was cover up, but I manage to get a photo (through the window cover, how ever I manage that – thanks Canon) of the two steel beams from one the two towers that is going to be main focus point in the entrance inside the museum. A beautiful building.

Regarding my visit at the Memorial have I done a separate post: “amazing people I just met” – I didn’t want to mix my time there with the rest of my experience of NYC.

After our visit at the Memorial was it high time for lunch and I had booked us in at North End Grill, but after exit the Memorial I was totally lost of in directions, had to ask one of the 100rds police men and he just told me walk across West Street to the river front and follow it. So we did and there we suddenly where in a little marina – The North Cove Marina – with the most stunning yachts and they were not in the lower price range. An true oasis in the concrete box like NYC is.

Had to walk 5 min future to get to our booked restaurant, but looking at the sidewalk seating beside a busy street … and the restaurant we just passed in the leafy marina – we turned around and had lunch at PJ Clarkes on Hudson instead. A fantastic place with fresh breeze and fantastic river view. The sun was just glued to our backs. Out on the Hudson river was there all kinds of sailing activities. And on the Brookfield Plaza infront of us was a massive outdoor motor (cars) show. Loads of people around.  A perfect spot for lunch on a warm sunday.

About Pj Clarkes there will be more coming later. All photos of the river is taken from our table. 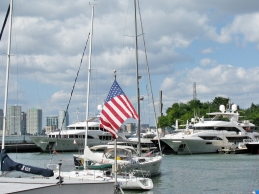 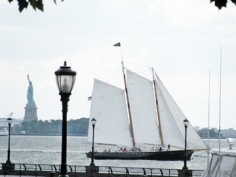 After lunch we felt that our feet just didn’t want to to do much more – so we asked for the direction to the closet subway station, that was Fulton Street. On the way to the subway we came across “Irish Hunger Memorial” and “Lily Pool”, both in Battery Park of course.

The Irish Hunger Memorial – most interesting was all the quotations in all the walls .. about hunger, tried to get a good photo of them, but impossible because of the strong sunshine. The Lily Pool was full of ducks, that was hiding for the sun behind the greenery, very nice little fountain with loads of people sitting around.

It was a bit of a walk to the subway and down in the station …. the problems started: how to get a ticket. Totally unmanned – only machines and no instructions what so ever. A nice lady showed us to buy a Metro card and it was very easy when I knew how to do it. Then we came to what direction we should travel – and with not visible route maps on the station or platforms. And with me thinking logical … we was on lower Manhattan and had to travel upwards … Uptown seemed very logic to me.

On the train it became after one stop – Wall Street  and after that Bowling Green, was that we was going to Brooklyn and not to Grand Central. When checking on the route map on the train – I was right in my fear. So we jumped off – and had to find the right direction .. which cost us another ticket.

I just love London Underground – any idiot can travel on it without get lost!! Everything very clearly mapped on platforms, stations and on the trains.

40 min wasted in the subway – and with very overworked feet – we bought two massive cappuccino at Aroma Cafe just across to our hotel, a fantastic coffee – we took the coffee with us up to our room on 24th floor.

Our first day in NYC was to an end … and that was something most of our body parts was very happy over. The evening is totally different  matter.

“Manhattan is a narrow island
off the coast of New Jersey
devoted to the pursuit of lunch.”
Raymond Sokolov