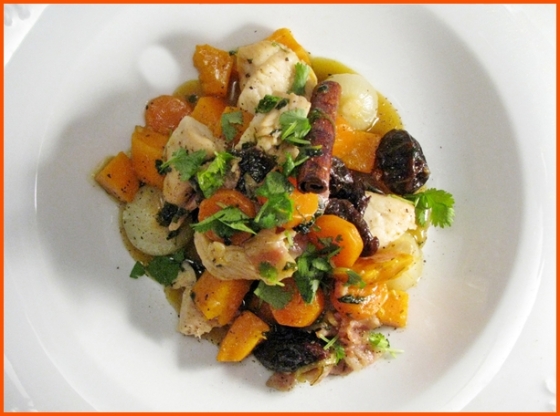 Antoinette@cooking-spree, you have met before through me – I did her lovely bread the other week. On the 23rd of January she just drops this into my inbox. Just reading I knew that – it has to happen very soon – and her photo was just jumping out at me. She call the dish “Tagine of Yam, Pearl Onions, Carrots, Prunes & Preserved Lemons”

This time I had to do a bit of shopping – I bought: sweet potato, onion, fresh coriander and mint.

At home in the freezer I had chicken breast (small) and uncooked bacon.
Also I had prunes, fresh ginger, fresh garlic (not in Ant’s recipe), carrot, maple syrup, cinnamon stick and chicken bullion (Knorr pots), the best thing since me. *smile 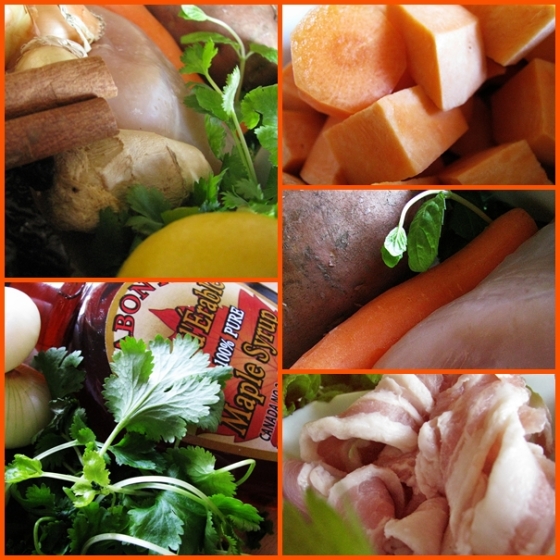 And I didn’t have preserved lemon zest – so what I did I took lemon zest and soaked in boiling hot water for about 10 min and drained well before add it to the tagine, worked fine.
Pearl onions was another small problem – the ones I found was massive – far too big so I bought what we call “frying onion” – miniatures of Spanish onion. They were so lovely small and great round in shape. The photo below that has a bit of blur because it’s take of the boiling pot on the stove. 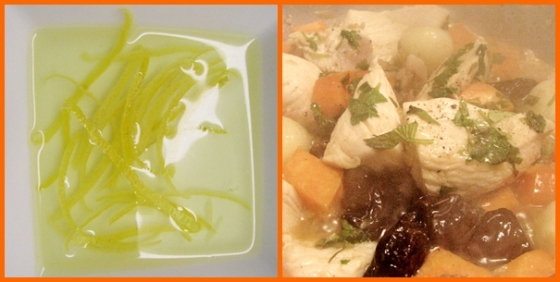 The chicken and the bacon was something I added to the dish – because only vegetables isn’t my thing, but I didn’t serve something with the dish, like couscous or rice – had it just as it was and that was plenty.

I added the finely chopped garlic and grated ginger to the butter and olive oil … and then the onions (whole) and the bacon bits, roughly cut – when it was time to add the rest I added also the chicken that I had cut in big chunks. After that I just followed the recipe.

35 min the whole dish took to cook – and it was looking after itself – one pot … brilliant. I left it for about 25 min under lid. After adding the chicken and bacon I have to rename it to:

Only regret I didn’t do more – because it just disappeared on my plate. Without any problems could I have done a second sitting. So flavorful and colorful as Morocco itself.

Cheb Rayan feat Mona – “Dana Dana” is the track I’m using here.
Othman Berroho, known as Cheb Rayan , is a Belgian-Moroccan Pop-Rai singer. He was born in Tangier, in 1980. He sings in French and in Arabic as well as in Moroccan and Algerian dialects. Cheb lives  in Belgium. In 2003, he released his first album ‘Rayan Chante Hasni’

Knorr stock pot photo provided by and thanks to: homecookingmemories.com