It’s  soundtrack theme of the movie “My Life As A Dog“ (Mitt Liv som Hund) from 1985
While replaying to a blogging sisters post and she had this fantastic picture with a dog stacked in a tree – and her comment was; my day in a dog – and my thoughts went straight to this wonderful film.
It’s another fantastic Lasse Hallström film, probably the film that made his way for Hollywood – and it’s priceless; a little odd film but very quint – a film filled with warmth and free spirit.
Not a big movie as such – Boxoffice; $8,345,266 (USA)

(text; Colin Tinto <cst@imdb.com> )
“Ingemar lives with his brother and his terminally ill mother. He may have a rough time, but not as bad as Laika – the Russian dog sent into space… He gets sent away to stay with relations for the summer. While there, he meets various strange characters, giving him experiences that will affect him for the rest of his life.” 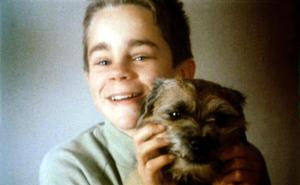 Whatever bad happens Ingemar says – it could be worst compare with ….

When Michael Jackson visit Sweden with his “Dangerous” world tour – and in Gothenburg he asked for the young actor, Anton Glanzelius – to spend the day with him at “Liseberg”, the big amusement park in Gothenburg. The reason was that Michael loved the film so much and what I understand where Anton visiting Neverland too. 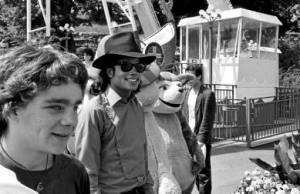 One on the reviews from “IMDB”
“Emotionally powerful film about childhood, 14 February 2003
10 stars
Author: Jaz Brown from Australia
This is an emotionally powerful (and sad) film about a boy coming to terms with the fact that his mother, who he loves dearly, is dying. It is also about being a child in a world where everyone older than you treats you with great condescension. Adults make decisions affecting his life without so much as asking for his opinion. No one talks about death, but it is in the back of his mind at all times. Everyone tries to hide what is really going on, as if “what you don’t know won’t hurt you”, but the boy is hurting badly.
There are no car chases, shoot-outs, or space aliens in this film. This film is about real life, about growing up, and about children’s sexuality. It is told wonderfully well, from a child’s perspective.
A magnificent film.” 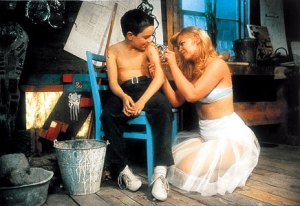 Have only seen the film in Swedish – but what I understand from the feedback on “IMDB” is that you should make sure you get a DVD with subtitle and not dubbed. Nearly every feedback say the same.

The film had 2 nominations in 60th Academy Award categories: Best Director and Best Writing, Screenplay Based on Material from Another Medium, but didn’t win either. The film won both BAFTA and Golden Globe for Best Foreign Film in 1988.

The film is based on Reidar Jönsson’s novel with the same name. “I`ve Got A Lovely Bunch Of Coconuts” – is the main music score in the movie – in Swedish the titles is “Dad I can’t open my coconut” – “Far, jag kan inte få upp min kokosnöt”

A very wonderful film for all ages and sexes all over whole world.

“A director must be a policeman, a midwife, a psychoanalyst,
a sycophant and a bastard.”
Billy Wilder

6 thoughts on “a lovely bunch of coconuts”