“Our ultimate hope is simply people’s yearning for peace,
their abhorrence of war, their sense.”
Olof Palme in 1984.

Olof Palme, in my eye the best politician there ever been, in world.
Born 30 January 1927 and murdered 28 February 1986, very sick as a child – he became one of the world’s most outspoken politician ever lived.

I was ”born” socialist and I have stayed socialist until 8 years ago … now I haven’t voted at all. Even if I admit that the democrats has done a pretty good work with Sweden while being in power.

Olof Palme was murdered on 28th Feb 1986. After been to the cinema with his wife Lisbet and their 2 sons. Security had never been a major issue for Olof and he often seen with any bodyguards. That evening in question he had told his bodyguards that they were not needed. After said goodbye to their sons he and his wife start walking home and on Sveavägen in central Stockholm just before midnight -they were both shot. Olof was fatally shot in the back at close range and the second shot was fired at Lisbet, the bullet grazing her back – she survived with serious injuries – she was walking a couple of steps ahead of her husband.

A taxi driver reported the shooting over his radio and 2 girls in a passing car stopped and run to trying to help. Olof was rushed to hospital, but pronounced dead on arrival, 00:06.

That evening they had sent me of the vessel because I had stomach illness and not allowed to work – had been laying on my sofa watching a movie that lasted until just after midnight, but I turned off the TV straight after the movie was finished. Next morning I was okay and went to work , as I came to the little square where I lived I saw all the new papers posters; PALME MURDERED!!!!. Just couldn’t take it in, went totally in shock and I were not the only one. The whole country went into shock. 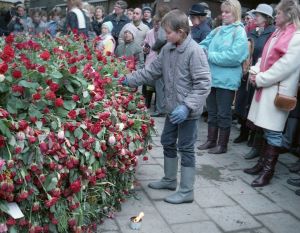 There was been many theories about his murder, one man, small time criminal, was arrested for quite a while and the released with a big compensation. Nobody has ever been convicted for the murder and I strongly believe it was our own CIA – SÄPO – that did it on some ones order. They were the only ones that knew he didn’t have his bodyguards that Saturday evening. I’m not alone with this theory. Olof started to be a problem, because he was very outspoken. Frequently a critic of US and Soviet foreign policy, he resorted to fierce and often polarizing criticism in pinpointing his resistance towards imperialist ambitions and authoritarian regimes, including those of Francisco Franco of Spain, Gustáv Husák of Czechoslovakia, and B J Vorsterand P W Botha of South Africa. Palme’s steadfast opposition to apartheid, which he labelled “a particularly gruesome system”, has elevated theories of South African involvement in his death – but I think it was “the power” in Sweden that did it.

Olof where very outspoken and against the Vietnam war and he was always walking in the front line of all demonstrations. He was close friend with Yassir Arafat and took Palestine’s side against Israel. So he was very uncomfortable in many eyes and black books, both in Sweden and aboard.

While leader of opposition, he parted domestic and international interests and served as special mediator of the United Nations in the Iran–Iraq War, but returned to power as Prime Minister after stunning electoral victories in 1982 and 1985.

As a forerunner in green politics Olof Palme was a firm believer in nuclear power as a necessary form of energy, at least for a transitional period to curb the influence of fossil fuel.

Shortly before his assassination, Palme had been accused of being pro-Soviet and not sufficiently safeguarding Sweden’s national interest. Arrangements had therefore been made for him to go to Moscow to discuss a number of contentious bilateral issues, including alleged Soviet submarine incursions into Swedish waters. He was right, in 1981 did the Russian submarine, U137, standed on ground outside Karlskona.

(text; en.wikipedia.org)
On the international scene, Palme was a widely recognized political figure because of his:
 harsh and emotional criticism of the United States over the Vietnam War;
 vocal opposition to the crushing of the Prague Spring by the Soviet Union;
 criticism of European Communist regimes, including labeling the Husák regime as “cattle of dictatorship” (Swedish: “Diktaturens kreatur”) in 1975;
 campaigning against nuclear weapons proliferation;
 criticism of the Franco Regime in Spain, calling the regime “devilish murderers” (Swedish: “Satans mördare”) after its execution of ETAand FRAP nationalists in September 1975;
 opposition to apartheid, branding it as “a particularly gruesome system”, and support for economic sanctions against South Africa;
 support – both political and financial – for the African National Congress (ANC) and the Palestine Liberation Organization (PLO);
 visiting Fidel Castro’s Cuba in 1975, during which he denounced Fulgencio Batista’s government and praised contemporary Cuban andCambodian revolutionaries;
 strong criticism of the Pinochet Regime in Chile;
 support – both political and financial – for the FMLN-FDR in El Salvador and the Nicaragua under FSLN; and,
 role as a mediator in the Iran-Iraq War.
All of this ensured that Palme had many opponents (as well as many friends) abroad.

We, Swedes, didn’t really released how big this man really was … until the memorial service that was held in Stockholm’s Storkyrka, where there was no special invites – any world leaders that wanted to come where welcome. One of the few times Arafat travelled abroad.
To see how many countries leaders turned up – countries I never knew about – there they were sitting side by side. Nobody thought about differences or war.

Personal I wish there was more men like Olof in leadership today … that stands for their beliefs and live by them. Maybe not always being politically correct, but that make a difference for the small that don’t have any big voice.

Olof Palme was a remarkable man.

In Febuary 1987, the Olof Palme Memorial Found – was founded.
For International Understanding and Common Security was established by Olof Palme’s family and the Social Democratic Party to honour his memory.

Decisions about the fund are made by a board and it’s chairman Pierre Schori.

(text; palmefonden.se)
Palme prize;
Each year, awarded a special prize awarded to people who have made efforts in Olof Palme’s spirit. The award is given, where possible, the Olof Palme’s birthday on Jan. 30. Since the prize was instituted in February 1987, it has been distributed to a number ofpeople who made significant contributions in any field related to Olof Palme’s life and achievements. The prize is worth $75 000./£47 300/€57 500.
Scholarships;
A scholarship from the Olof Palme Memorial Fund can make a difference to an individual or for many. New experiences and thoughts of people can create ripples in the water and change reality in Sweden or anywhere else in the world.
Every year the fund in about 800 applications from young people, schools and organizations in various ways to promote greater international understanding and to combat racism and xenophobia.